Once we’d decided to learn about sailing, it was obvious that we needed to find a conference, along with other ways of immersing ourselves in the information of the sport and cruising lifestyle. We were already taking sailing lessons and would sail in the open water in August, so a boat show or cruising conference was just what we needed to bridge the gap.

Low tide along the Lymington River

I admit it- I’m a fan of conferences.  If they have a specific theme that interests me, provide some sort of information sessions, include opportunities to learn from others with the same interests, and allow opportunities to share my thoughts as well, I enjoy attending. The conferences I’d attended previously were mostly professional: project management, healthcare industry, airline industry, telecommunications industry, software industry, and programming profession, but I’ve also attended writing, gaming, sci-fi, and education-focused conferences.

With sailing classes in progress, and pictures of sailboats dancing in our heads, we knew we needed to look at real blue-water sailboats versus just the photos online. I learned of a Blue Water Weekend being hosted by the World Cruising Club (WCC) in Lymington, England, and we discussed whether it was wise to attend this event so far away. Was it worth the time off? Was it worth the money? Would we really see the value of the event if we did choose to attend?  We wanted to stay immersed in the culture and knowledge of life on a sailboat, and realized that connecting with the WCC that hosts the ARC (Atlantic Rally for Cruisers) and the World ARC (a sailboat rally around the world) would be an excellent opportunity to extend the scope of our learning. It was settled – we decided to use some frequent flier points to travel out to England and learn from the World Cruising Club and their members about the boats and blue water sailing, and traveling around the world at the same time.

We landed in London early enough to spend a bit of time touring Windsor Castle on our way to Lymington. Since parking was at a premium, we had a nice stroll to 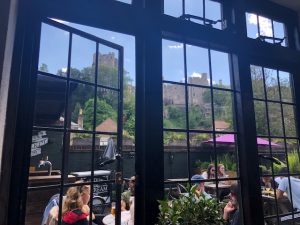 View of Windsor Castle from the Royal Windsor pub

the castle, through a beautiful little park and along the non-linear roads. We stopped for lunch at the Royal Windsor pub, and James indulged in a meat pie, while I enjoyed my favorite beverage, Bitter Lemon. I’m sure it seems mundane to pine for Bitter Lemon, the mixer that is in every English pub, but we just don’t have access to it usually, so each time I’m in the domain of Queen Elizabeth I make sure I experience that wonderful not-too-sweet drink.

The queen’s standard was flying at the castle, indicating that she was in residence, and the tour guide gave us some interesting demographic data about the castle: 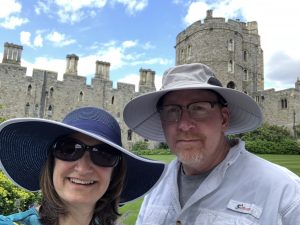 Windsor Castle, a section at least

We learned about King Henry the 5th’s tendency toward the flamboyant, and by the end of the tour were able to identify which rooms or areas were decorated by him. The entirely gold Grand Reception Room was clearly his work, and I so wanted to take a photo to post here. I asked if I could and the negative response left me with only a memory and a few words to describe it. There were intricately gilded carvings and decorations around the frames of each painting and door, gilded candelabras, chandeliers, and fireplaces, as well as an ornately decorated ceiling covered in gold. Obviously, it included a red carpet through the center. Grand? Oh, yes.

The guides were extremely helpful when we had questions, and seemed to enliven at any hint of interest from the crowd. There was much coverage of the 1992 fire and restoration.

On our way from Windsor to Lymington, we took a wrong turn that landed us in the middle of the Royal Ascot. Fate was blessing us that day with a fancy display of hats and horse-drawn carriages, and attire that generally fit with the era of the buildings around us. It was nice to be transformed in that unexpected manner. Later while checking in I was asked if I’d been to Ascot (a reference to my large hat I believe) and I was able to say with honesty, “yes”. 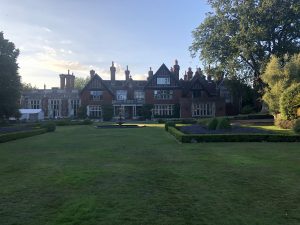 We stayed at the MacDonald Elmers Court Hotel and were enamored with the rustic elegance and beautiful view across to the harbor.

The ARC Blue Water Weekend started early the next day. We walked across the river and through the town to get to the venue, which gave us the opportunity to see the extent of the sailing community’s hold on the town. There were shops dedicated to sailing attire, trinkets, and lots of other maritime activities, a chandlery, yacht clubs, and the boat yard where the event was to take place, Berthon Boat Company. We went back through the town at lunch to get another British must-have for us: meat pies. 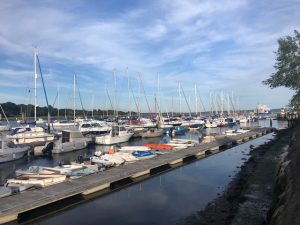 The slips at Berthon

I took pages and pages of notes at the information sessions.  The event was not large enough to have separate simultaneous sessions, so James and I heard the same people talk and could compare notes afterwards. There were vendors in an expo area so we learned about water makers, and communication devices and options, as well as about future ARC rallies. We talked to brokers, manufacturers, cruisers, and rally organizers, as well as those like us who were looking to learn before jumping into the lifestyle.

We toured 5 boats on the hard (out of the water), all of which were mono-hulls, meaning they were your typical sailboat with just one hull, versus a multi-hull like a catamaran.  We weren’t sure which was right for us yet, a mono-hull or a catamaran, but we were leaning toward mono-hull due to price and availability. Peregrine was our favorite of all, but out of our price range, of course. We learned about European VAT taxes for cruising ships, and identified key features that we liked in a boat, such as a larger navigation station. We concluded that we’d want something 60 feet or smaller, with me on the “smaller” end of that scale and James on the “60 feet” end, but we’d established a range at least, so that was good. 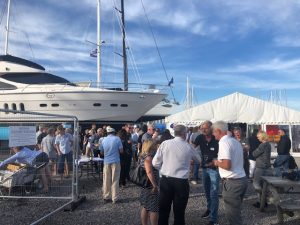 We learned that we’ll need a few things that we don’t current have besides the sailboat: polarized sunglasses, charts and/or pilot books for all areas visiting, 400 foot lines for traversing the Panama Canal, items to trade with islanders (like fish hooks, line and nails), and antibiotics. We learned about how to find crew and how to handle them when they’re aboard. We got tips on protocol and common sense in island nations, safety, various ports, and the best stores to visit if you want good prices.

At the evening event we met many wonderful people, most were cruisers looking to learn more about specific topics and some were less knowledgeable like us. We learned about the Nautitech brand of catamaran here, and became engaged in the first of several conversations regarding the virtues of mono- versus multi-hulls. There wasn’t a conversation that I was disinterested in, and there were many personalities that I was intrigued by. I was drinking up the camaraderie and free flowing information, and I took advantage of the exposure by asking many questions. 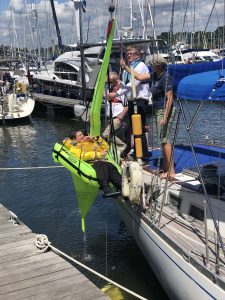 We were two of only a few Americans at the event, and very few people referred to US politics, fortunately. Everyone was quite friendly and wanted to lend a hand or information to help us on our way into this cruising and sailing lifestyle.

When we returned home, we were pleased with the information we’d learned, and with the sailboats we’d visited, although there were no catamarans there to compare against the mono-hulls. We were still convinced that a mono-hull approach was for us at that point. It was clear that we needed to have a “next step” in this grand adventure, another plan to visit sailboats and to learn from people who had more experience than ourselves, so we signed up for the Cruisers’ University at the US Sailboat Show in Annapolis, Maryland, four months away. 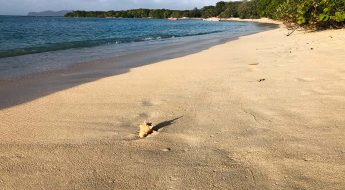 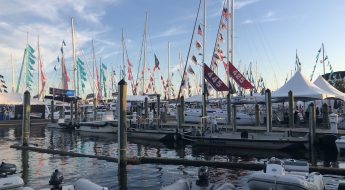 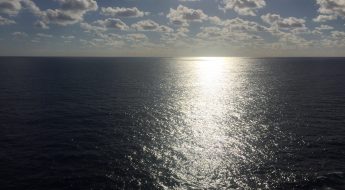