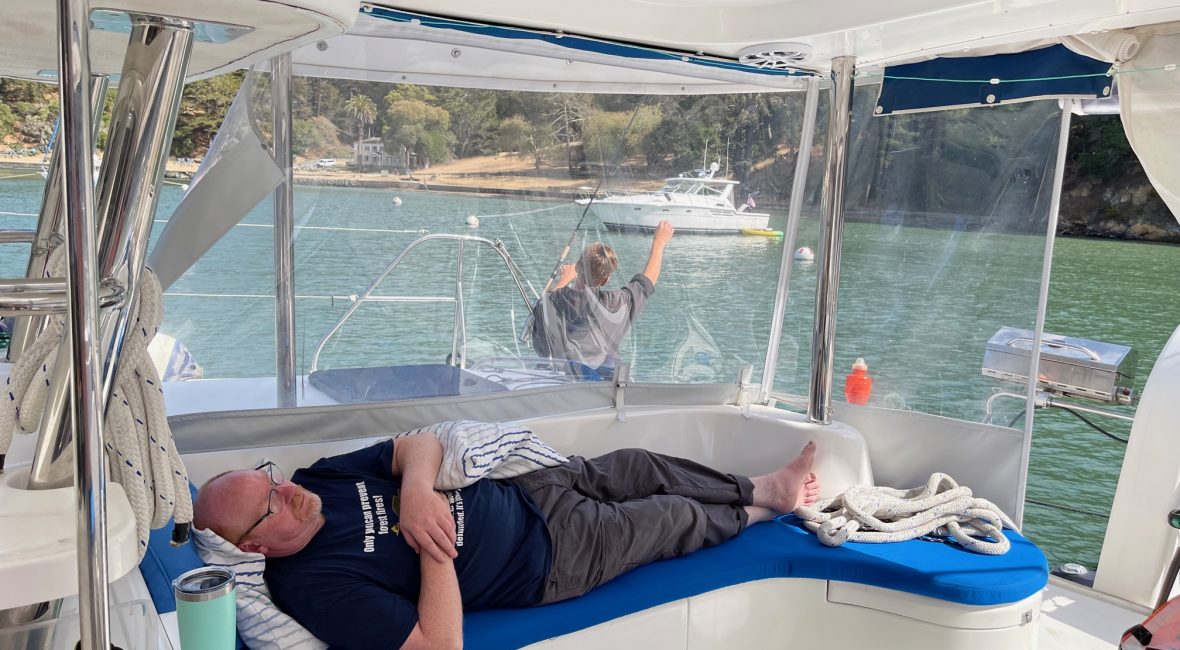 Our goal for the next two years is to learn to sail our boat and gain enough experience with it that we feel comfortable leaving the San Francisco Bay Area for locations unknown.

Since we brought Erin Skye to the west coast of the US, and moved aboard in June, we’ve been fixing and upgrading many systems to make the space more livable. Some of these changes include black water tank and hose replacement, adding a clear enclosure to the cockpit, replacing cockpit cushions, installing an automatic shower pump, replacing sink hardware, addressing standing rigging concerns, and fixing several issues with the dinghy motor. That was all needed and appreciated, but the warmer season for sailing in the Bay is upon us and we realize that our opportunity to practice the art and science of sailing may be reduced if we don’t take advantage of it now.

Fortunately, we joined the Emeryville Yacht Club and they schedule cruise outs approximately every month, so we have been participating in those for the last couple of months.

Angel Island is a mere 1.5 hour trip from our slip in Safe Harbor Emeryville Marina, and overall I think our family handled it well, as our first San Francisco Bay cruise out.

We all understood the course that was plotted, and the roles we were to fill, and had settled into the motion of the sea. Ethan was sitting in the cockpit while James and I were on the helm seat when we heard Ethan say in a calm voice, “Man overboard.” WHAT!?! I immediately told him not to joke about such things, but he quickly clarified that a fender had escaped the boat and was now floating behind us. Ah, fender overboard. We turned around, and went through the procedure we’d practiced several times before, and successfully recovered the fender.

Within 10 minutes Ethan again said, “Man overboard.” This time it was a different fender, obviously unsecured since being removed at the dock, just as the last one was. We recovered that one too, but during the effort, the starboard engine stopped and we weren’t able to restart it. The good news is that catamarans have two engines, so we just continued to our destination in Ayala Cove, Angel Island.

Mooring between two mooring balls was much more challenging than it would have been with two engines, but with the help of our yacht club and a couple other cruisers in dinghies we were able to secure Erin Skye, prepare a 5 layer dip and join other yacht club members at the welcome party. 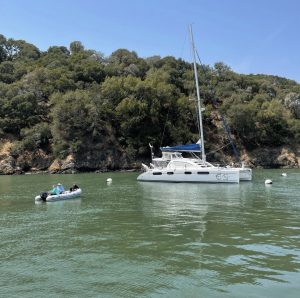 Our family taking the dinghy to Erin Skye in Ayala Cove, Angel Island. Photo courtesy of Britta Fjelstrom of Vacilando

We took our dinghy (our “cruising car”) to the coast and rode the tram around the island, learning about the 3000 year history of the island: from the fishing and hunting of the Coastal Miwok Indians, to many government uses, including immigration station, to the state park it is today. Poetry written in Chinese and other languages mark the walls of the immigration station, recording feelings and aspirations of the detainees, some staying for years because of discriminatory laws of the time. Our travels open a door into different places, times, cultures, and values, and each of these experiences has something to teach us, even when what we learn doesn’t represent behavior that is consistent with our values.

While Ethan fished in the cove and I did some reading, James was able to figure out the problem with the engine: a fuel filter needed to be replaced. Though we had an extra, apparently we didn’t have the fittings to make it work properly, so we would need to resolve that after returning and ordering the parts. 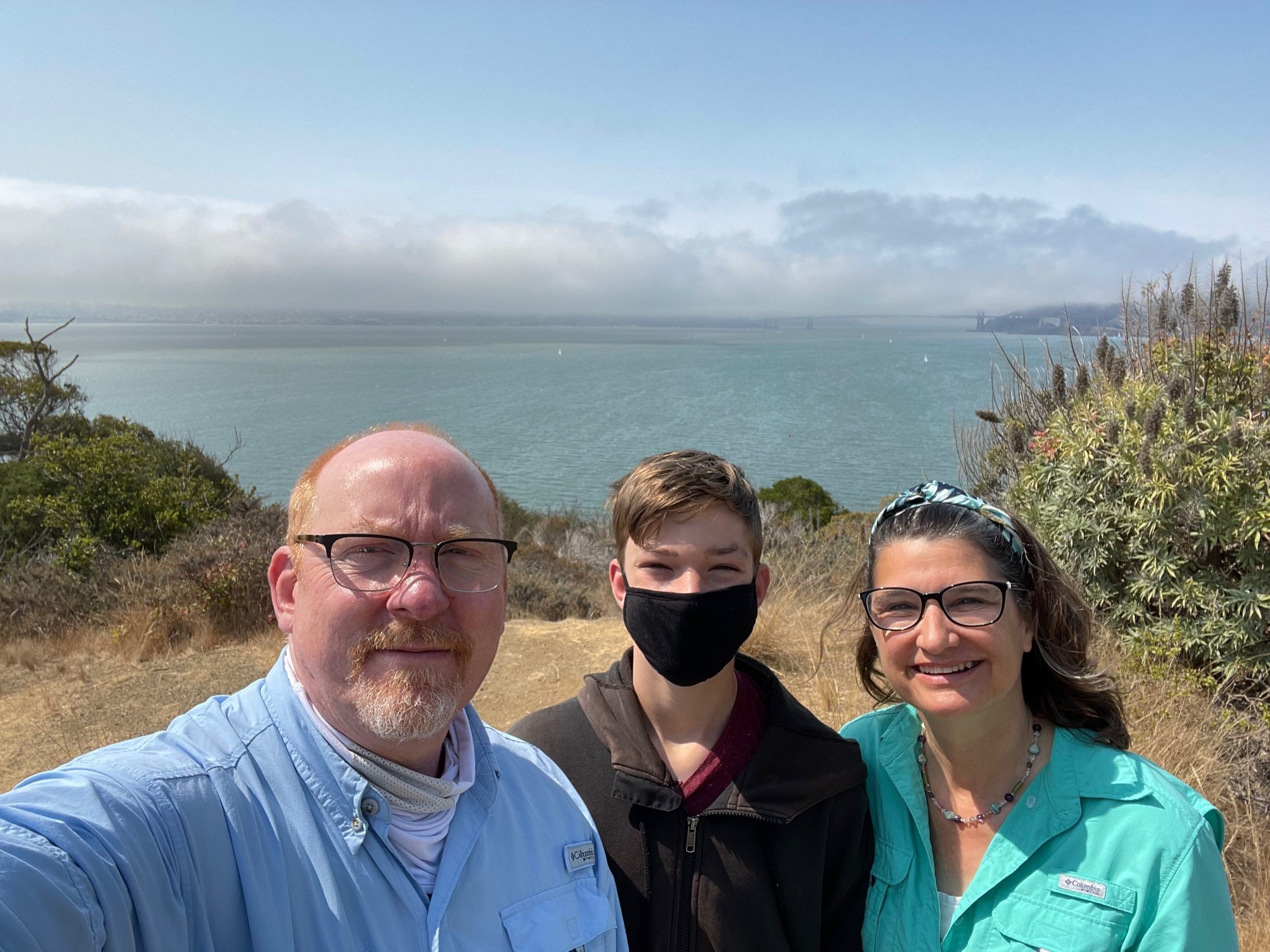 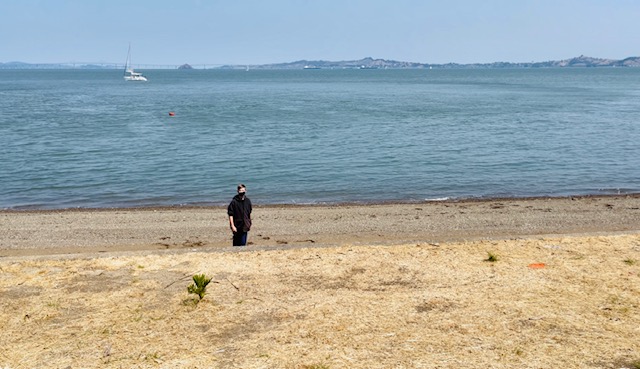 We hosted a games night with the yacht club before turning in for our final night at Angel Island. Our departure the next morning was uneventful but the trip back consisted of dodging many sailboats and ferries. It also pointed out the lag between the chart plotter inside at the navigation station and the helm station. Though many things don’t move quickly on a boat, we certainly want the response time to be better than it was and felt that it was not as safe as it should have been, leading to a lack of visibility at some times. When we got back to land, we borrowed from next year’s upgrade budget and got a new chart plotter for the helm.

Half Moon Bay Cruise Out

At Angel Island we moored for the first time. This month we went to Half Moon Bay and anchored for the first time. In each case we identified more tasks that should be done before we depart from our home marina, like making the man-overboard stick easily available, and disconnecting the fruit hammock so it doesn’t turn into a fruit smashing hammock.

Our trip to Half Moon Bay included many learning experiences, even though it was the least stressful and most fun of all of our outings so far. Nothing broke, our crew had a better idea of what to do and some practice doing it behind them, our chart plotter was cooperating, and so was the weather, generally.

We left Emeryville at 6:35am, just 5 minutes after our planned departure. Our buffer of over 1.5 hours gave us confidence that we would reach the Golden Gate Bridge before the current going under it would be against us, making us work harder to leave the Bay. 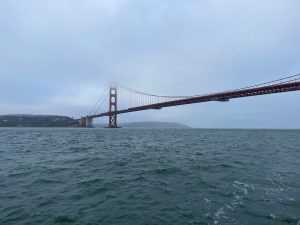 Almost out the gate for our cruise out

The sea state did get more rough once we were outside the Bay, and Ethan decided to test the conditions in his berth in the forward part of the boat. He lay down in bed and rode wave after wave in a unique blind roller coaster experience. One large wave took Erin Skye low, then high, then falling quickly again, causing Ethan to levitate briefly above his bed and convincing him of the value of NOT being at the bow under those conditions.

We got a sail out for a couple of hours, however the winds were almost 180 degrees from the norm, and instead of helping us down the coast, they were against us. 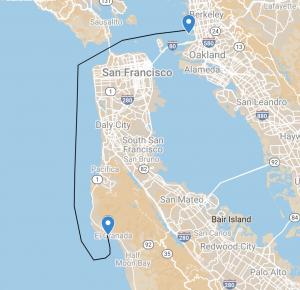 When we were about 15 minutes out from the harbor we called into the harbormaster to get an allocated slip. Unfortunately, there were none remaining  that could accommodate us, so we had to anchor instead. We knew this would be a possibility, so we were prepared. It was so easy compared to the last time we tried anchoring in San Diego (that ended in utter defeat), that we didn’t trust that the anchor was secure. So we set the anchor alarm and waited for quite a while before we felt satisfied that we were actually secured to the bottom.

We looked forward to taking the dinghy to the marina and land, and connecting with our fellow yacht club members. It was challenging to find a place to tie up the dinghy, but after talking with the coast guard and another dinghy crew, we found the designated area, accessible only through a passage under the pier, ducking to avoid water pipes and dodging other obstacles like concrete pylons. 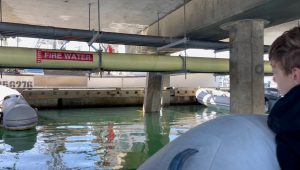 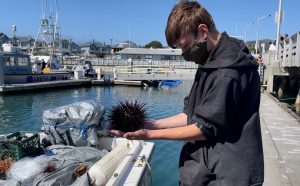 Fisherman were at the dock, selling black cod, urchins and other seafood that had been caught earlier in the day. Ethan wanted to try fresh black cod, but by the time we would have a chance to cook it, it would no longer be so fresh, so we passed. He did enjoy having a sea urchin wiggle on his hands but was disappointed when we denied his request to keep it as a pet. 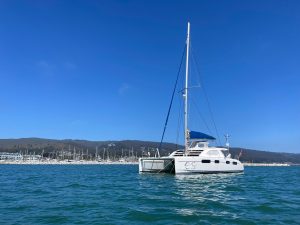 When we were ready to leave Half Moon Bay, we let Ethan sleep in since we didn’t need his help with dock lines. About 105 feet of chain needed to be pulled in, and that would be quick work. I used the windlass controller to bring up the chain but soon noted a thick paste of mud clinging to it. This meant I’d need to wash off the chain as I brought it up.

That wasn’t a big deal, but it wasn’t something we were planning to do, and took more time than expected. Actually, it was quite satisfying to spray off the mud! When deploying the anchor the day before, we counted off the length so we knew we had approximately the right amount of chain for the job, but when I was bringing it in I didn’t pay attention to this. So I was surprised when the anchor became seated in its spot below the bridge deck. Just like that when James learned that we were free, we slowly motored out of Pillar Point Harbor.

On the way back once again we had the wind on our nose. It was a peaceful trip. Ethan and I spent time at the bow with the brisk wind in our faces observing the murre seabirds (aka penguins of the north) plopping down into the water when we got close. Later we learned that they sometimes dive down 600 feet to get food. We saw a whale off in the distance, while James dodged bull kelp and crab pots and kept us on course. The tethers we used to connect to the mast allowed us to feel and be safe while out of the cockpit. 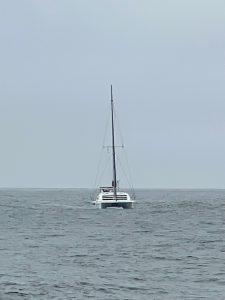 Erin Skye from the front, photo courtesy of Geli Bergin from Irene

We’ve headed out on our own without the structure of a yacht club event 3 or 4 times, and have plans to choose new destinations in the near future. As the weather gets colder and wetter, we will need to decide whether to cozy up at the dock for a bit, or put on foul weather gear and learn skills under different conditions. I suspect we’ll choose the latter. Though there are many projects that can be taken on indoors, I’m sure we’ll want to stretch our wings, raise and unfurl the sails and experience Erin Skye more for what she is: a sailboat! And since we’ll encounter a huge variety of conditions out there, having a more varied foundation of knowledge and experience will go a long way to improve our comfort level as well as our level of expertise. 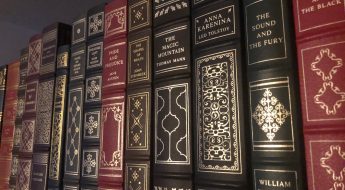 Books are our Friends 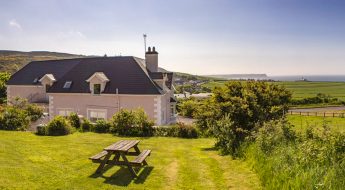 I completed my 50,000 words during National Novel

We decked the “halls” with lights and plan to

You have to start somewhere!