Though our home base is in Emeryville, it only covers a little over one square mile of land, so we spend most of our time driving in Berkeley.  Driving in Berkeley is like a video game where your goal is to minimize the number of objects that you hit while getting from one point to another within the allotted time, while there are people and cars, strollers and scooters, bicycles and OneWheels, electric and regular skateboards, tandem bikes and elliptical bikes, shopping carts, joggers, and dog-walkers all intent upon making you fail.

The game throws in blindingly bright sunshine, rain, visual barriers like trash cans, cars parked very close together, Amazon trucks and other vehicles double parked, road crews, slow-moving and stopping recycling and trash trucks, and outdoor seating that has taken over part of the road. All the cars have dings but you get extra points if you avoid dings on your own vehicle. 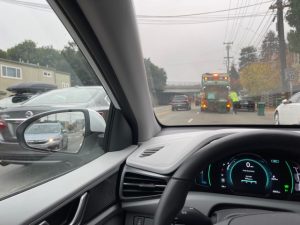 The roads are not arranged in an organized grid because this game is not meant for beginners. A single road will reach a T, but then continue on, in name at least, 100 feet to the south. There are intersections of major streets that don’t meet perpendicularly, with another road thrown in for good measure and geometric interest.

Two lane roads require constant lane-shifting while the left lane is used for left turns at intersections, and the right lane is blocked by parked cars most of the rest of the time. Some of the cars parked haven’t moved in weeks or months, and are teeming with belongings that fall into the street.

The visual noise along the streets is so loud and distracting that it takes almost super-human focusing skill just to stay between the lines of the lane, then the lane will open up to a specially marked bicycle boulevard indicating that bicycles can use the lane in the same manner as cars, in the middle, but providing less visibility to the vehicular traffic since they are so small comparatively. There are farmer’s markets and tent cities spilling into the streets. Shops come in a large variety of colors with interesting wares for sale such as bright feather boas, multi-colored rugs, costumes, and unidentifiable knickknacks. 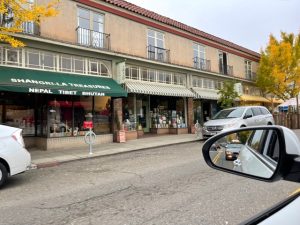 Lots to see in the storefronts

It’s clear that the obstacles you need to avoid aren’t following the same rules that you’re required to follow, however, the game’s narrative indicates that they will. Instead of waiting for the traffic to clear, cars on a side street trying to get onto the main road will creep into traffic to force the main road traffic to stop or go around if there is enough room. Pedestrians behave the same when in crosswalks or not, often just walking into traffic without looking, as if they have infinite lives. Red lights appear to be mere suggestions for some of the vehicles if there isn’t any cross traffic.

To make the game more interesting, the rules change as you go, with signs indicating what hours you are allowed to turn left or right, usually including two ranges per day. Some otherwise through roads have been blocked with concrete barrel-like planters to dissuade usage from a particular direction, while one-way signs are regularly seen on two-way roads. 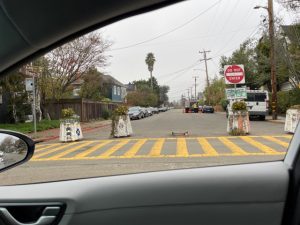 Planters in addition to signs

When you arrive at your destination, there is usually no place to park, causing you to lose precious time searching for a spot, or parking lot, and walking back to the destination before you truly arrive.

Your phone and vehicle navigation aids always underestimate the time it will take to get there, and they don’t know about accidents or other slowdowns. In fact, they will regularly suggest a route that takes up to twice as long as the shortest route during rush hour. 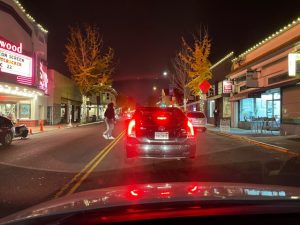 After a while you start catching on to how to take advantage of the chaotic system, if only a bit. You can use pedestrians to your advantage, as other vehicles are forced to stop when pedestrians are in front of them, which at times can create an opportunity for a turn that would otherwise be more difficult. You become aware of which pedestrian crossings have the most traffic and least engaged pedestrians so you can avoid them or just be extra aware there.

Identifying routes that maximize four-way stops versus crossing high volume roads without the protection of a sign provides a bonus level of security that is rare in the game. You get a power-up on trash days when cars don’t park in the right lane, for the most part.

After a while you become accustomed to the vibrant colors, so they are recognized as commonplace and less distracting. When a new unexpected color catches your attention, it’s probably something that you need to focus on versus part of the background.

In the end, if we choose to play the Berkeley Driving Game we are accepting that we are responsible to be alert, and can expect to be surprised, to laugh, to be dazzled by diversity and uniqueness, and to say, “Really?!” and “Did you see that?!” throughout the experience. A couple of the main goals of our change to a cruising lifestyle are to see different cultures and to appreciate the world the way it is where we are visiting, and this game helps to check both of those boxes. It also keeps us on our toes, pushing us toward discomfort. We’re not choosing the comfortable path, but the one more interesting. 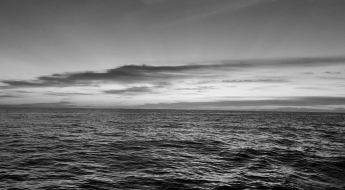 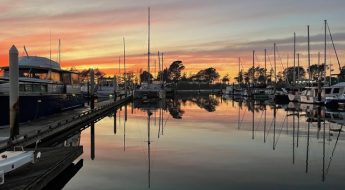